“People have funny things swimming around inside them.”

In the film Clash By Night Mae Doyle (Barbara Stanwyck) returns home after a ten-year absence to a small coastal fishing town in California. Her brother, Joe, doesn’t ask too many questions–he can tell that she’s down on her luck. Mae arrives with just a single suitcase and a large chip on her shoulder about life and men. 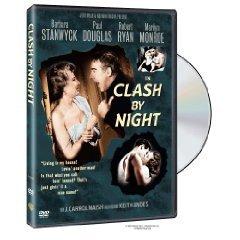 Joe’s boss, Jerry D’Amato, shows interest in Mae. Jerry is a very solid character. He owns a fishing boat, and he takes care of his demented father and irresponsible Uncle Vince. Mae marries Jerry–making it clear that she does not love him–but that the relationship offers her security. After a year of marriage and a baby, Mae, who has long been attracted to Jerry’s sleazy friend, Earl Pfeiffer (Robert Ryan), breaks out of her housewife routine and begins an affair with Earl.

Clash by Night is film noir, but it has soap opera tones too. The thing that prevents one from reaching for the nearest hankie is the performance of Barbara Stanwyck as hard-as-nails Mae Doyle D’Amato. Although her dilemma is clear–security vs. excitement, Stanwyck’s hard-edged speeches eliminate the need for tears. It’s difficult to feel sorry for her husband, Jerry. He’s a good, decent man, and obviously out-of-his depth with Mae, and he goes into the marriage knowing she doesn’t love him. Jerry is the sort of man other men like to make fun of–probably because they can never be as solid and reliable as he is. Jerry seems emasculated and this is largely due to Uncle Vince–an opportunist who blatantly uses Jerry.

Mae’s attraction to Earl–even though he’s exactly the sort of man she’s trying to avoid–adds interest to the plot. Also, Marilyn Monroe stars as Peggy, the tomboy sweetheart of Joe Doyle. She works in the cannery, and the cannery represents the sum total of the career opportunities in town. Peg sympathizes with Mae, and it’s curious to see a very young Monroe in the role of a tomboy and without that carefully developed blonde bombshell role.

Clash by Night is directed by Fritz Lang. It was filmed in Monterey, and fans of Barbara Stanwyck will find the film well worth watching for its strong characters and excellent acting.