Set in the future, the bleak satire The Gladiators from British director Peter Watkins is a docudrama that televises “the Game,” an international competition of military exercises conducted in the interests of “world peace.” These games were devised as a substitute for war, and are supposed to channel and control man’s natural predilection for violence, so instead of the entire planet being ruined, and millions killed, the violence is confined to a small space with a few dozen participants. Well that’s the theory, at least. The Game is held in Sweden, a neutral country, and the programme, sponsored by a pasta company and complete with advertisements, is broadcast worldwide as teams aim to achieve their goal of reaching the control room. Each team is comprised of a number of soldiers–male and female–who are given numbers only. 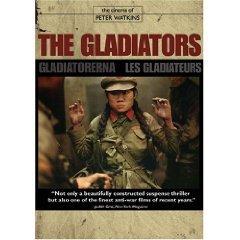 While The Gladiators is an anti-war film, it’s not an anti-war film in the traditional sense. The Game is, arguably, a viable alternative to war, an arena in which only a handful of people die rather than millions. But at the same time, this is warfare distilled down to its essential elements: a blind acceptance of established hierarchy, the depersonalization of combatants, a willingness to die for abstract ideals, and the attaining of meaningless strategic goals. The team members are representatives of their countries, and when members of the allied team are interviewed prior to the commencement of the Game, they are unable to answer questions about why they are fighting–except to spout platitudes regarding national pride, patriotism, duty and honour (“I’m here to defend the democracy of my country” blah, blah). And as the Game commences, the fraternizing generals of the participating countries dispassionately monitor the teams’ progress, stuffing themselves with various dishes as the ‘lower’ (and subservient) echelons suffer. The soldiers play the Game to win nothing of substance, and they are manipulated at various points to boost the ratings.

A French student enters the Game in an attempt to destroy it, but as he becomes part of the Game, he’s inevitably manipulated by it. And by the introduction of this character, Watkins makes some strong statements regarding revolutionary ethics, about working within the system, and about recuperation by the system. Although the film was made during the Vietnam War, the film seems chillingly prescient given the staging and orchestration of the Iraq war, with key points covered by major news stations in theatrical entertainment fashion. The Gladiators is a deeply subversive, thought-provoking film, and there’s an entire audience out there for this incredible film if people knew about it. Watkins is hardly the darling of mainstream media, and so his films remain largely ignored. Re-released on DVD in 2006, extras include The Diary of an Unknown Soldier–a 17 minute film made by Watkins, a Watkins filmography, and a 12 page booklet which includes a self-interview with this amazing director.