“She never knew chips came from taters till she read a book on it.”

“I like being a monk. It’s good for me nerves.”

“Just being caught with one of them bulbs in his cottage, an old fisherman could get about 18 months in the nick.” 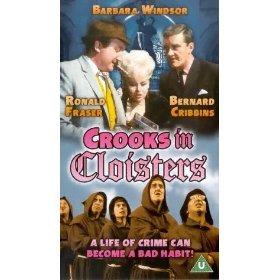 From director Jeremy Summers, Crooks in Cloisters is a pleasant little comedy film that happens to star some of the Carry-On regulars. There are not a lot of laughs here, but there is a great deal of the nostalgia crowd.

After a train robbery, a notorious gang hides out in a monastery on a tiny island off the coast of Cornwall. With Inspector Mungo (Alister Williamson) in pursuit on the mainland, gang leader Little Walter (Ronald Fraser) buys the island and tells the gang members to dress and act like monks. The plan is to stay on the island long enough for the heat to cool down and then they will return to their lives of crime.

The film has its moments and these mainly occur when outsiders come to visit the monastery. In one segment of the film, crafty local Phineas (played marvelously by Wilfred Brambell of fame) transports over a rowboat of snotty tourists. And on another occasion two real monks arrive. While gang leader Walt has the audacity to tell gang member Specs (Davy Kaye) to keep his mouth shut because he’ll give the game away, Walt’s cockney slang causes the real monks to raise their eyebrows a bit, and these scenes are really amusing.

But apart from that we get to see Bikini (Barbara Windsor) in a monk’s habit dancing the twist and taking a bubble bath, and comedian Bernard Cribbins plays gang member Squirts–a man who becomes touchingly devoted to the goat. Most of the films humour is situational–it’s supposed to be naturally funny to see these crooks donning monks’ habits, minding goats and tending the monastery garden. And there are a few salient points here: as one gang member notes, the austerity of the monks’ cells are uncannily similar to jail cells (“Just like the nick.”) There’s also a sweet romance between Phineas’s granddaughter, June (a very young Francesca Annis) and crook/poet Willy (Melvyn Hayes). The underlying irony however is that these harden criminals eventually take to the monastic lifestyle with gusto, and of course that raises social and moral questions that this comedy film does not address. In one scene, the crooks voice their collective opinion regarding their preference of the monastic life to Little Walt, and he sets them straight with a speech loaded with social and class implications, and this is the film’s soberest scene.