“We’ll put that romantic crap to bed for once and for all.” 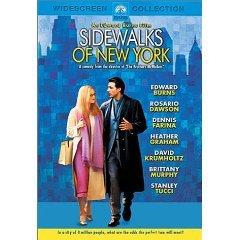 Similar to Woody Allen’s brilliantly funny Husbands and Wives, Sidewalks of New York also examines male-female relationships, infidelity, and marriage through a handful of characters. And as in Husbands and Wives, during Sidewalks of New York, from actor/writer/ director Edward Burns, scenes also segue to interviews in which the characters are asked key questions regrading their personal relationships and their attitudes towards sex, love and relationships.

Sidewalks of New York begins with Tommy (Edward Burns) engaged in an argument with his girlfriend. After being thrown out, he moves in temporarily with middle-aged Lothario, Uncle Carpo (Dennis Farina) and then tries to find a new apartment. He uses real estate agent Annie (Heather Graham) who’s married to cheating dentist Griffin (Stanley Tucci). Griffin’s self-confessed “European attitude to marriage” has him in an affair with scrappy waitress Ashley (Brittany Murphy). Ashley is doggedly pursued by doorman/future rockstar Ben (David Krumholtz). Ben was married to teacher, Maria (Rosario Dawson).

The interconnected relationships between these careening characters are explored with humour, but honestly Dennis Farina as Uncle Carpo steals the film, with Stanley Tucci coming in as a close second. The all-too brief scenes with Farina are hilarious. Carpo’s advice to the love-lorn Tommy: “Nothing heals a broken heart like a brand new piece of boodie”  is enough to screw up a man for the rest of his life, for while Carpo thinks he knows all about women, his approach to women might have worked in the 50s but it’s too out-of-style to work in the 21st century:

The weakest part of the film is Maria’s relationship (such as it is) with Tommy. She is the sketchiest drawn character of the lot. Heather Graham just doesn’t cut it as Griffin’s wife, and since she is a main character, this is unfortunate. Here as Annie, she delivers her lines to Griffin with a little smile that sometimes just seems out of place, but she seems much more at ease in her scenes with Burns.