I’m not fond of films that take the child’s point of view, but the Yugoslavian film, When Father Was Away on Business from director Emir Kusturica is excellent for its view of exactly how a child tries to make sense of the adult world set in a totalitarian state. It’s 1950, two years after Tito broke from the Soviet Union, and the film set in the Informbiro period covers two years in the life of Malik (Moreno D’E. Bartolli), the youngest son of married couple Mesa (Miki Manojlovic) and Sena (Mirjana Karanovic). Mesa, who is perpetually unfaithful during the course of the film, falls foul of his brother-in-law, Zijo (Mustafa Nadarevic) a communist party official. While Mesa’s crime is ostensibly an off-hand remark he makes about a cartoon, his real ‘crime’ is having an affair with Ankica (Mira Furlan), a woman who then becomes involved with Zijo. The personal matter between Mesa and Zijo is camouflaged as a problem for the state with Zijo misusing his power.  As part of the rehabilitation process, Mesa is bundled off as forced labour to a mine but Malik is told his father is ‘away on business.’ 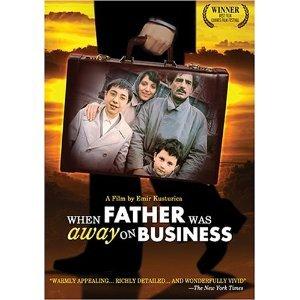 Malik, who turns out to be a great, stoic little kid by the way, is used to reading between the lines when it comes to negotiating the adult world. After all three generations of the family live in rather cramped quarters, and Malik, who’s a quiet child overhears things he’s not supposed to. For example, the father of his best friend was taken away “by men in leather coats,” and the family even holds a funeral with a empty coffin at one point. Malik learns that some things happen but are never discussed, and while he rolls with seemingly bizarre events, he doesn’t fully accept some of the lies he’s told.

Eventually Malik and his family move from Sarajevo to the remote wetland area of Zvornik in order for Mesa to undergo “resocialising,” and throughout the film, we see a number of family events: a wedding, a circumcision, and a funeral which display the culture which is inevitably  impacted by the totalitarian state. The film makes it clear that normal, robust family life is not suppressed by the totalitarian state but only complicated by it.

There are a couple of scenes in which Mesa is called in for questioning–once in Sarajevo and once in the remote area of Zvornik. Both times Mesa is questioned there’s rather interestingly no torture, but then again there’s no need for it as Mesa has already been judged by the bureaucratic powers. In both scenes circulating fans act as symbols of the totalitarian machine with the power to blow people’s lives apart. When Father was Away on Business is both an excellent and seminal film for its low-key portrayal of a difficult time in Yugoslavian history, and for the way in which the film adroitly depicts the interference of the totalitarian state in the lives of ordinary people. Mesa’s behaviour, after all, is a matter for his wife–not a concern of the state, and so ultimately the film shows how the abusive state interferes in private lives for the flimsiest of excuses.

One response to “When Father was Away on Business (1985)”