“The first thing you learn in the army is how to be a man, and men smoke and drink, and fuck … but the ones that don’t get caught are the smart ones.”

Based on the Mario Vargas Llosa novel,  Time of the Hero Francisco J. Lombardi’s film The City and the Dogs (La Ciudad y los Perros) is an ultimately disturbing film which examines how morality and individuality are subsumed within a militaristic institution. The institution under scrutiny in the film  is a military college in Lima, Peru, and the film begins with scenes depicting the savage “baptism” of cadets. In N. America, the term ‘hazing’ would be used to describe the degrading activities that take place in the dormitories and showers with new cadets humiliated and being treated like dogs by the older cadets. There’s almost too much to absorb in the mayhem of these hellish scenes–a fiery hoop, one cadet hanging upside down, cadets on all fours with leashes around their necks, and two cadets engaged in a ‘dog fight.’ It’s clear that one cadet, a strange figure known as The Jaguar (Juan Manuel Ochoa) refuses to submit to the humiliations heaped on the others. But even more than that, The Jaguar, who’s a former gang member, fights back and establishes his dominance. 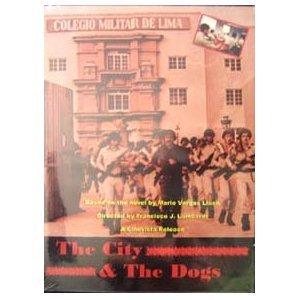 All of the cadets are supposed to abide by the college’s strict rules which include no alcohol and no smoking. The Jaguar, however, along with three other cadets: Cava, Boa (Aristoteles Picho) and Rulos (Tono Vega) form “the Circle” a shady organisation responsible for providing the other cadets with contraband: pornography, alcohol, cigarettes, uniforms and even, more significantly stolen tests. It’s almost graduation time, and The Circle arranges for the theft of the chemistry test, but when the theft is discovered, all the cadets who were on duty that night are confined to barracks until the thief is uncovered.

Part of the film follows the relationship between two of the cadets outside the Circle–The Slave (Esclavo) played by Eduardo Adrianzén and the Poet (Pablo Serra), who writes letters and dirty stories for the other cadets in the dormitory. When Esclavo is confined to the barracks following the theft of the chemistry test, he asks the Poet to go and visit Teresa (Liliana Navarro) a girl he adores. When barracks confinement continues, Esclavo, a quiet, friendless cadet who bears the brunt of nonstop bullying, breaks under the pressure….

Although the film’s plot seems fairly simple, there’s a lot going on in this complex film. On one level, there’ s the group behaviour of the cadets–all of whom are afraid to cross The Jaguar. After all since The Jaguar provides the other cadets with cigarettes and booze, to some extent, he’s made their confinement at the college far more tolerable. None of the cadets dare cross The Jaguar–no matter how cruel he is, and this is due in part to fear but also to the material comforts he provides.

When a death occurs at the college, an investigation is conducted and a report generated.  Lt. Gamboa (Gustavo Bueno), a decent man who wants to do the right thing, questions its accuracy with catastrophic results. Through the actions of Gamboa and the Poet, we see just how individual morality is squashed or perverted by institutional & military dictates.  Truth is trumped by such nebulous concepts as ‘duty,’ ‘honour,’ and ‘tradition,’ so we see that those who thrive within a militaristic institution or society are those who are willing to allow their individual morality to be controlled or subsumed. Therefore someone like The Jaguar thrives and even uses institutional dictates to run amok while gentler cadets are crushed by the system. Of course, on another level, life within the college could be symbolic of life within a militaristic society with bullies, sadists and conformists rising to the top.

The film also examines how individual motivation is affected by the perceptions of  ‘the group’. What motivates the Poet, for example? Is he motivated by guilt or something finer? And then what of the Jaguar? Can we believe his final statement? Or is he simply trying to be a ‘hero’ or a tough guy to the last? The film doesn’t give any easy answers to these questions, but the message ultimately is that if the individual decides to stand up against the ruling system, then one should be prepared for the system to strike back against the individual. Just how far anyone is prepared to go to fight the system, depends on just how much one is willing to pay.

For those wishing to dip into Peruvian film, Lombardi’s film, Mariposa Negra is superb, and Ojos Que No Ven should not be missed. There’s also Tinta Roja, Don’t Tell Anyone, and Pantaleon y Las Visitadoras

Tagged as based on book, individual vs state, institutions, militarism, morality, pathology of authority