“I’d like to report a lewd and disorderly party.”

I’m a John Waters fan. I love his films, and to me, one of the very best things about a Waters film is the dialogue. Those funny lines come fast and furiously. Sometimes I’m so busy laughing at one line, that I miss the next one. The book Trash Trio is the answer for me. Here in print–at last–are the immortal scripts of Pink Flamingos, Desperate Living and Flamingos Forever. The latter script is especially valuable, for as fans know all too well, Flamingos Forever was never made (sob). But now there is no reason to mourn–for here I can drool over every nasty word to my heart’s content. In fact, I’ve highlighted my favourite lines and plan to memorize them for special occasions.

Included in the book are–not one–but TWO–yes, let’s count them people–TWO introductions by the master himself–John Waters. One introduction was written in 1996, and the other was written in 1998. Waters mulls over the cast for a remake of Pink Flamingos, and he also explains why he never made Flamingos Forever.

Each of the scripts contains a cast list, and scene directions–along with treasured photographs of the many memorable moments from each film. As much as this pains me to admit it, John Waters is not for everyone–but for Waters fans, this book brings hours of enjoyment and many filthy memories.

Now I have no excuse to forget these immortal words:

“Filth is my politics, filth is my life!”
“Tell her this isn’t some communist day-care centre.”
“After Divine is humiliated and destroyed, Maryland will be ours!”
“She’ll be a heroine–even to non-filthy people.”

All That Heaven Allows (Sirk)

The Mother and the Whore (Eustache)

The Wizard of Oz (Fleming) 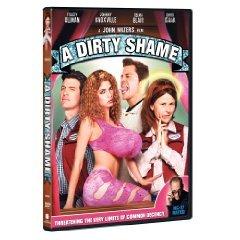 Those fans of cult director John Waters who suspected that he was mellowing and becoming remotely respectable can think again. John Waters’ new film A Dirty Shame proves that Waters is still producing Trash Cinema. Trash film fans will be delighted to know that A Dirty Shame takes us back to this director’s pre-Polyester days.

Sylvia Stickles (Tracey Ullman) and hubbie Vaughn (Chris Isaak) live on Hartford Street in Baltimore. They have a daughter, Caprice (Selma Blair)–also known as exotic dancer Ursula Udders–a hot favourite at the local biker bar. The Stickles form the perfect dysfunctional Waters family. Caprice is under house arrest for numerous incidents of public indecency, but her dad tells her that “the government wants you to stay inside for a while,” and “you’re too pretty to go out.” When the film begins, Sylvia brushes off Vaughn’s advances and hurries off to work at the local shop owned by her mother, Big Ethel (Suzanne Shepherd). On the drive there, Sylvia suffers a head injury, and she meets Guru Ray Ray (Johnny Knoxville). Ray Ray–a self-described “sexual healer” turns Sylvia into a sex addict.

There’s a message in the film that is evident in the Neuter Resistance Platform. Phrases such as: “tolerance went too far” accompanied by the idea that society is now more permissive than the 60s, indicate the film’s less-than-sly knock at moral righteousness. This film is a raunchy riot from beginning to end, and it certainly isn’t for the meek or the Neuters. As with any John Waters film, don’t expect subtle solutions. This is over-the-top sexual anarchy. Nothing more. Nothing less. Die-hard John Waters’ fans will be happy to be back with familiar filth. Everyone else … you’re on your own ….

The film’s soundtrack is packed with appropriate Filth Music. Special mention of Patty Hearst who plays Sex Addict, Paige, and Mink Stole as a particularly righteous Neuter. Special features (and I watched the NC-17 version) include: commentaries, “All the Dirt on A Dirty Shame” (a behind-the-scenes look at the film), a deleted scene, and the trailer. Welcome back to the gutter, John. We knew you’d never left us.

“Erase these sordid and sickening thoughts.”

A young blonde woman (Mary Vivian Pearce) wearing hot pants, seamed fishnet stockings, and stiletto heels goes for a stroll in the park where she feeds raw meat to the birds. She’s stalked by a foot fetishist (John Leisenring), and gives in to his demands. When the blonde leaves the park, Divine (sporting a Jayne Mansfield look) drives by in a Cadillac convertible. Divine sees a male hitchhiker (Mark Isherwood), and she imagines him nude. Divine is so distracted by this vision of loveliness, she runs over the blonde. Divine scoops up the body and heads to town–the rest of Mondo Trasho follows the tragic misadventures of Divine and the unnamed blonde.

John Waters fans … this is a MUST SEE. Anyone else … well you’re taking your chances. If you’ve never seen a John Waters film, you’d probably better start with one of his tamer titles. But hardcore Waters fans, do whatever you have to do to get a copy of this film.

Highlights of the films include:
A prolonged foot fetish sequence accompanied by Frank Sinatra singing Strangers in the Night
The maniacal Dr Coat Hanger (David Lochary) and his mutilating surgeries
Divine indulging in a little proletariat reclamation (shop lifting) in a thrift shop
Three appearances by the Virgin Mary (in a launderette, an insane asylum, and finally in a pig pen)
An insane, topless dancer (Mink Stole)
Divine posing for the National Enquirer
A shoot out between the FBI and the National Enquirer

Mondo Trasho is John Waters’ first feature length Gutter Film, and it was made with a $2,000 budget (and the low budget shows). Most of the actors play at least 2 roles, and there is no dialogue. Voice over accompanies the insanity, and there’s a great soundtrack that ranges from classical to the deranged. Film trivia: Waters, David Lochary, Mink Stole, Mary Vivian Pearce, and Mark Isherwood were arrested for ‘conspiracy to commit indecent exposure’ while making the film. All that’s left to say is that they must have had great fun making this film. It’s pure Mondo Trasho.

“I play in John Waters films.”

I placed this film in the John Waters category (even though it isn’t directed by him) so that fans of Edie Massey may be able to find the review. For anyone interested in getting a copy, I got mine straight from the director (Robert Maier) who sells on e-bay.

Fans of John Waters films will appreciate this short film gem Love Letter to Edie directed by Robert Maier. Edith Massey, who died in 1984, is perhaps best known for her role as Edie, the Egg Lady in Pink Flamingos. In the film, which is approximately 15 minutes long, Edie tells her life story with re-enactments of the high points–first as an orphan, a dancer, a madam, and she was also a barmaid and thrift shop owner in Baltimore where she met John Waters. Clips include scenes of Edie in her most famous roles, Edie discussing working with John Waters, and John Waters discussing working with Edie.

An additional 15 minutes of footage includes the director’s–Robert Maier–memoir of Edie. He describes how he came to work with John Waters and Dreamland Studio, and also how he met Edie. Maier notes how Edie ‘stood out’ from the cast, and he was inspired to make this film–at the cost of $1500. Maier recalls Edie, her thrift shop, her many cats, and also her kindness. This short film is a gentle, touching tribute to perhaps one of the cinema’s most unusual stars.