Add Cinema Verite to the list of worth-catching HBO films. This interesting, well-acted and thought-provoking film is based on the story behind the very first reality TV show, and after watching the film, I was surprised that I hadn’t heard the story of the Loud family–the subjects of a 1973 PBS documentary miniseries called An American Family. Attractive Santa Barbara based Pat (Diane Lane) and Bill Loud (Tim Robbins) along with their 5 children seem like perfect raw material to producer Craig Gilbert (James Gandolfini)–the man who had the creative idea to film an American family as entertainment–not a particularly easy sell according to Cinema Verite. Gilbert is directed towards the Louds by a mutual acquaintance, and when he pitches his idea of filming the Louds in their upscale Santa Barbara ranch style home, at first Pat is resistant but then folds and agrees to participate. The cameras move in and the action begins. 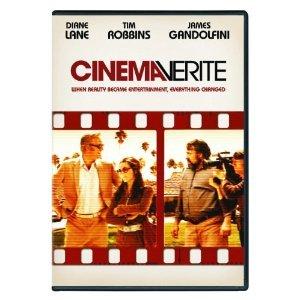 On one level, the Louds appear to be the perfect American family with a stay-at-home attractive mother, a hard-working Nixonite dad and 5 talented children, but under the surface everything isn’t as Disney as it first appears. Cinema Verite depicts Gilbert as being fully aware of the potential for cliff-hanging drama within the fractured family structure.

This 2011 film which runs to 86 minutes cannot, of course, do justice to all the drama contain in the 12 episodes that aired in 1973, so while some issues and events are given centre-stage, other aspects of the Loud family drama are given short shrift. Nonetheless, this is a very entertaining film which asks some relevant questions: is there such a thing as reality TV when participants are aware that cameras are recording their every word? Does the presence of cameras inevitably cause people to commit acts they wouldn’t otherwise? Do people get caught up in their own roles and, in essence, subconsciously write a script for the roles they are playing? Does a camera turned on the family dynamic cause more introspection? Finally, of course, there’s the question of whether or not the series subjects are exploited, and that’s covered in the film’s final scenes.

The Loud family saga explodes through Bill’s exposed infidelities with numerous women including one brainless wanna-be actress, and then there’s the oldest son, Lance (Thomas Dekker) who takes up residence at New York’s Chelsea Hotel, and becomes best friends with Candy Darling, Jackie Curtis and Holly Woodlawn before he decides to go and find himself in Paris. The film doesn’t emphasis the radical cultural impact that Lance’s homosexuality must have caused through the episodes weekly beamed into American living rooms. Lance Loud was the first openly gay person to appear on American television, and he basically comes ‘out’ during the course of the series. One scene depicts some of the nastiness he faced as a result of the programme.

Diane Lane as Pat Loud is as superb as ever, and she’s also a very sympathetic character–a woman who’s managed to submerge her suspicions about her husband’s infidelities until the cameras arrive. Cinema Verite argues that the Louds participation in the series caused the family to implode. Perhaps a meltdown would have occurred without the camera crew on hand, but there’s a very strong argument that at the very least the Loud family’s participation in the series hastened the family crisis.