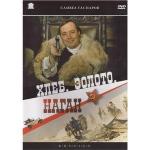 “I don’t give a shit for your views and beliefs.”

The title of this Soviet film Bread, Gold, Gun (Khleb, Zoloto, Nagan) just about covers what happens in this action-packed adventure set during the Civil War era. I’ve come across a couple of Soviet films to date that depict the same scenario–a race against time to deliver gold (sometimes stolen) to the beleaguered Bolshevik forces so that they can win the day and beat the forces of the White Russians. Add this film to the sub-genre. I expect it has a name, but for the purposes of this blog, I am going to name this the Bolshie-Banditry sub-genre.

Ok, here’s the premise. Loyal Bolshevik party member and Moscow orphanage director, Olga obviously a formerly pampered member of the privileged classes, is given an assignment to deliver 3 sacks of grain to the starving children under her care back in Moscow. A sailor, Sasha,  is ordered to accompany Olga on her mission. He’s more than a bit resentful at having to guard a young bourgeois and he initially sees his role as a servant or underling and this makes him taciturn and uncooperative. As the two suffer through a series of hardships, they form a bound which acknowledges their shared morality and political goals.

At the same time, a Chekist officer is given three gold bars to deliver to the Bolsheviks. This gold will, of course, determine the outcome of the civil war.

All the characters converge on a train station as they try to make a connection to Moscow, but here they are ambushed by a sneaky party of Whites. The Chekist is killed but he hands over the bullion to stationmaster Zaytsev. Olga, Sasha, and Zaytsev are joined in their escape from the train station by another Chekist officer, the steely-eyed Gorbach. At first they seem to be safe, but then they run slap bang into a nest of bandits.

We really had a lot of fun with this film. For some reason, these Bolshie-Bandit films have the air of a spaghetti western. In one scene for example, as the four characters flee from the train station, the bandits appear up on top of a hill. Remember how the Indians would always appear on the hill and look down on the wagon train? Well the same moment occurs here. Also in a later part of the film there’s a long back and forth chase sequence through a small narrow village with the Reds in a car and the Whites on horseback. I’m telling you, it’s just like one of those old cowboy and indian films. The only thing that’s missing is John Wayne. Instead we get a sort of John Wayne–except here he’s a narrow-eyed, cool customer who’s the Chekist Gorbach, and of course he’s the hero of the film.

Some of the film’s very best scenes occur in the bandit lair. The Whites are not portrayed altogether unsympathetically but when it comes to heroics, no one comes close to the cold steely courage of the Chekist officer–a man the chief bandit describes as a psycho. But in spite of the Chekist heroics, Arkady the bandit leader steals the film. He displays a fastidiousness that is diametrically opposed to his sadistic behaviour, and of course his amorality and love for money is also seen in contrast to those willing to die for their respective causes.

One of the things I enjoyed about this escapist film is that its romanticism is found in the tale itself and in the sacrifices the characters make for each other–not in some drippy smoochy scenes. Great stuff!