“Some militant acts are easier on the eye than others.” 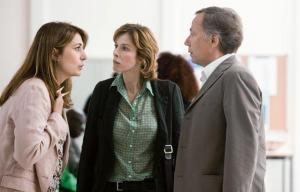 I’m a die-hard fan of Fabrice Luchini, and I’ll watch any film in which he features. For that reason, I bought Les Invités de Mon Père, a 2010 film from director Anne Le Ny on a whim.

Can anyone beat French film when it comes to portraying the subtleties of family relationships? To me, that’s a rhetorical question. Les Invités de Mon Père depicts a three-generational family with a number of problems that are more or less swept under the rug under a crisis precipitates some ugly and honest confrontations. This really is a superb film, and for co-writers Anne Le Ny and Luc Béraud, the drama depicted here is so real to life, it rather uncannily mirrors a real-life situation I recently watched devolve.

Les Invités de Mon Père is labelled as a comedy, and some of the comedy arises over the hypocrisy of attitudes towards immigration. While a light comic tone is maintained throughout, this is also very serious drama which examines the events that lead to a seismic shift in the moral decisions of some of its main characters.

Lucien Paumelle (Michel Aumont) is an 80-year-old activist–a retired doctor who lives alone in his rent-controlled Paris apartment. He has two middle-aged children: Business lawyer Arnaud (Fabrice Luchini) and a daughter Dr. Babette Paumelle (Karin Viard). Arnaud, affluent and status-conscious, is married with children, and his relationship with his father is a little strained. Babette, on the other hand, has always been very close to her father, and in fact she followed her father into a medical career. She lives with her lump of a boyfriend, Rémy (Olivier Rabourdin) and is overworked treating poor disenfranchised patients.

Lucien announces to his family that he’s going commit a “militant act” by allowing some illegal immigrants to move into his apartment. Both of Lucien’s children are concerned about this decision–after all Lucien is an elderly man and this could potentially violate his apartment lease. Arnaud’s wife is also worried and in a moment of concern, she visits the immigration centre where Lucien volunteers and suggests that the immigrants who move into her father-in-law’s apartment should meet a certain criteria of suitability.

A dinner party is arranged with Arnaud, his wife Karine (Valérie Benguigui) their children, and Babette and Rémy in attendance. They’ve dutifully gathered together a few bags of old discarded clothing to donate to the immigrant family they’re about to meet. To their shock and horror, Lucien’s houseguests are a svelte blonde Amazon from Moldovan named Tatiana (Veronica Novak) and her daughter, Sorina (Emma Siniavksi). Any idea that Lucien’s “militant” act  is motivated by charity is squashed permanently when he blithely lets slip that he married Tatiana a few days earlier.

At this point, the film follows Arnaud and Babette as they are faced with the dilemma of whether or not they should step in and interfere with their father’s relationship with Tatiana. Both Arnaud and Babette undergo personal crises as they question their moral obligations and their lives subsequently fall apart. Arnaud shifts from a sliver of glee that his dad has the hots for this peroxided blonde to confronting the truth about his poor relationship with his father. Babette, on the other hand, feels cheated as she sees her father’s apartment taken over & trashed, her mother’s possessions hidden away, and a small inheritance disappear.

The question becomes at what point should steps be taken to intervene. Should Arnaud and Babette ignore their father’s behaviour? Have they the right to interfere? As the film plays out, just what is acceptable and what is unacceptable becomes a matter for moral debate. The film does an excellent job of showing how we may think that we act according to a certain moral code, but that circumstances can arise to test those beliefs. Both Arnaud and Babette find themselves horribly torn by conflicting moral beliefs while Arnaud’s wife, whose decisions are black and white and not coloured by familial relationships, has a much easier time deciding which moral path to take.

While all the actors deliver marvellous performances, both Fabrice Luchini as the materialistic Arnaud and Karin Viard as his sister Babette are spectacular. Arnaud goes through a range of emotions while he observes his father’s behaviour, and these emotions range from sly glee to cold, unemotional acceptance of his father’s decisions. Poor Arnaud is also under siege from his children who both approve of Lucien’s behaviour for different reasons. While Lucien digs in deeper with Tatiana, Babette, feeling rejected by her father undergoes a horrible identity crisis with life-changing, hilarious results.

For French film fans, Les Invités de Mon Père is a must-see, and it’s certainly a film that engages the viewer into one of those “what-would-I-do-under-the-same-circumstances” scenarios.