In 1936, unemployed working class labourer, Dave Carr (Ian Hart) attends a Communist meeting in Liverpool and is recruited to fight the Fascists in Spain. He heads out with little idea where he is going, but with his Communist party card in hand, he soon meets up with a loosely banded detachment of the POUM militia group. The POUM organisation was a Marxist Communist union that formed an alliance with FAI/CNT Spanish Anarchists with the common goal of defeating renegade fascist general Franco. 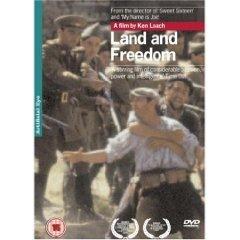 The militia live in rough camps, lack weapons, and engage in a type of trench warfare with the fascists. Dave’s adventures include the liberation of a fascist-held village, and a slow tender romance that simmers with fellow militia member, Blanca (Rosana Pastor). At first Dave is quite enthusiastic about his involvement in the war. To him, this is “socialism in action.”

Dave’s disillusionment sets in when the POUM militias come under Stalinist control. With Stalin supporting the Communist Party of Spain, the militias are ordered to accept new rules. The women–who’ve fought alongside the men–are ordered to become either nurses or cooks. In spite of the fact that new weapons are promised, nothing appears. The militia members are divided by conflicting opinions–some seeing that the militia is now effectively de-fanged, join the Stalinist International Brigade, but other members stay faithful to the militia alliance. Land and Freedom documents Stalin’s betrayal of the POUM organization and their allies the Anarchists–soon POUM and the Anarchists (who’ve made some significant military advances) are under attack by the Stalinists and the Republican army. The Stalinists shut down the POUM newspapers and arrest some of their leaders. Instead of fighting the fascists, the parties who are supposed to be allied against Franco, are fighting each other. It’s the old divide and conquer strategy–but this time the Stalinists effectively divide the Anarchists and the Marxists and squash them–betraying the revolution, and betraying Spain. The film makes it quite clear that Marxism is not the same thing as Stalinism, and that the Spanish Civil War was a war within a war. There’s one great scene when Dave–fighting with the International Brigade-is holed up on one side of the street shooting at a group of Anarchists barricaded on the other side of the street. Insults are shouted from each side and then Dave exchanges comments with a British fighter from Manchester. They ask each other what they are doing there, and each man answers “dunno.” It is this event that causes Dave to cease fighting with the International Brigade and return to the militia.

Land and Freedom is first and foremost a political film–the romance between Dave and Blanca is never forced or even central to the plot. The era portrayed by the film is a complicated subject, and this Ken Loach film does an incredible job of putting large political ideas into an understandable format for the average viewer. One scene, for example, portrays the arguments that take place between villagers following the village’s liberation from the fascists. Some of the villagers wish to divide up the land immediately and begin collectivism (one of the goals of the newly elected democratic government that Franco intended to squash). The argument whether or not to begin collectivism illustrates the different arguments that the villagers have on the subject, and this scene also includes information regarding England and France’s refusal to sell weapons to the Spanish republic–even though it was a well-known fact that Franco was receiving support from Germany and Italy.

Dave is a marvelous character–an everyman who “leaves Liverpool with a daft romantic idea” that’s trammeled by political realities. Ian Hart’s low-key acting style is perfect for this role. We know that Dave’s disillusionment is complete when he rips up his Communist party card. Ultimately–the film is an avowal of the ongoing struggles of the working classes. Land and Freedom is an important political film, and anyone even remotely interested should dig out a copy of this buried film. It’s informative, but it’s also an excellent, excellent film. Well done, Ken Loach.