“The guerilla fights for an idea.” 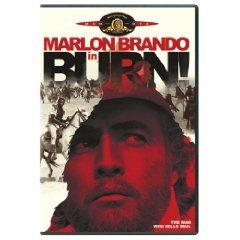 BURN director Gillo Pontecorvo’s scathing critique of colonialism is set against backdrop of the exploitative sugar trade of the 19th century. If you get over the problem of Marlon Brando playing a blond Englishman with a terrible accent, then this really is a marvelous film. To Brando’s credit, this was the film he was the proudest of in his long career.

The story is set in the 19th century, and begins when Sir William Walker (Marlon Brando) is sent by the British government to a small Caribbean island. The Portuguese, who now run the island, slaughtered the native Indian population and then imported slaves from Africa. The slaves work the lucrative sugar plantations, and the British seek to usurp the Portuguese as masters of the sugar trade.

When Walker, the British government’s agent arrives, a slave revolt is brutally squashed and its leader garroted. Walker was supposed to fuel this revolt and ensure its successful conclusion, so he casts around for a new rebel leader, seeking someone who has “nothing to lose.” Walker finds what he’s looking for in charismatic slave Jose Dolores (Evaristo Marquez). By persuading Dolores to rob the Bank of the Holy Spirit, Walker manipulates circumstances in which the slaves must defend themselves against reprisals. Walker supplies arms, and soon a slave revolt takes place.

This is a volatile period for those on the island. The sugar is rotting in the plantation fields, and somehow, the black slaves must be persuaded to stop the uprising, and get back to work accepting the yoke once more under the guise of employment. Walker is all too aware of Haiti as an example of a revolution “carried to [their] extreme consequences.” It may be useful to ignite a revolution, but it’s harder to stop it once it’s already in motion. One great scene depicts Delores–now a self-appointed general of the revolution as he enters a huge mansion to negotiate with the whites. The mansion is manned with black footmen, complete with powdered wigs. The slaves are ‘freed’ and the British take over the sugar trade on the island. But, of course, the slaves aren’t really free; they’ve just exchanged masters.

One scene depicts Walker advising the local landowners on the merits of paying the former slaves for work, and he compares the situation of owning slaves vs. paying plantation workers to maintaining a wife vs. paying a prostitute for an hour. He asks “which do you prefer? Or should I say which do you find more convenient? A wife or one of these mulatto girls?” Then he proceeds to lecture about the salient characteristics of each situation based on economic factors: “what is the cost of the product? What does the product yield?” And in this manner, he breaks down human beings into units of production. It’s all simply a matter of economics for him.

The film analyzes the nature of freedom and empire through the slave revolts. Both the Portuguese and the British fail to grasp the notion that: “If a man gives you freedom, it is not freedom. Freedom is something that you must take.” As Delores says: “If a man works for another, even if he’s called a worker, he remains a slave. And it will always be the same since there are those who own the plantations and those who own the machete to cut cane of the owners.” Delores grasps the fact that the whites need black labour: “they may know how to sell sugar, but we are the ones who know how to cut the cane.” Soon, the Royal Sugar Company has exclusive “rights of exploitation” and this ‘right’ effectively controls the island’s entire economy. Thus corporations run politics and people are no more than troublesome commodities.

One of the interesting aspects of the film is the relationship between Walker and Delores. To Walker, achieving his goals is sport. This is not an emotional campaign for him, and he approaches his goals unemotionally, logically, and with a dispassionate analysis. To the wealthy white landowners he says that they will defeat Delores “not because we’re better than he is or that we’re braver than he is, but simply because we have more arms and more men than he has.”

The film feels a little cheesy at first. Many of the actors are dubbed in English, so the result is poor. However, if you loved The Battle of Algiers, Burn is an excellent companion piece. By the half way point, it’s clear that we are privy to something truly extraordinary, for the story expands and presents some great universal truths through the difficult relationship between Walker and Delores.

Walker is a wonderfully amoral character–he could have sprung right from a Conrad novel, but there are also shades of Graham Greene here. He makes friends with the slave population, but he only uses them to achieve his goal, and he’s not interested in their fate beyond that. The film portrays, quite brilliantly, the nature of a guerilla uprising and the continuation of the revolutionary flame. Walker seems all too aware of the danger of a popular uprising, when he cautions the white rulers “the guerilla has nothing to lose.” And that in killing a hero of the people, the hero “becomes a martyr, and the martyr becomes a myth. A myth is more dangerous than a man because you can’t kill a myth.” Similarly, “a hero who betrays is soon forgotten.”

Some of the best scenes take place as Walker ponders moral questions. There is much to be learned from this film concerning warfare, empire, and human nature, and developing a conscience can be hazardous to one’s health when dealing with corporations, empires and colonialism. For as Walker says “that’s the nature of Profit. One builds to make money, and to go on making it, to make more, sometimes it’s necessary to destroy. Yes, I think perhaps it’s inevitable.” Burn is a great political film with a memorable musical score from Ennio Morricone.