“It’s impossible to know what a woman truly hides.”

In the Peruvian comedy film, Destiny Has No Favorites wealthy Ernesto (Javier Valdez) rents out the grounds of his splendid mansion to a television studio. He then announces to his wife Ana (Monica Steuer) that he’s going away on business leaving her to deal with the actors and actresses from the soap-opera that’s about to filmed outside. Ana, who’s peevish, spoilt and bored to tears, professes disgust at the “vulgarity” of the popular soap, Destiny, and her disdain becomes even greater when her two maids glue themselves to the windows watching the soap being filmed.

This soap is set in the Hotel Anything Goes and the plot concerns a wealthy wheelchair bound woman, Virtudes (Elena Romero) who’s married to a young unscrupulous hunk Alejandro (Bernie Paz). Glamorous star Maria (Angie Cepeda) competes for Alejandro’s attention. Like most soaps, the plot is full of cliches, bizarre plot twists, and general nastiness.

The director announces a new role–Alejandro’s ex-girlfriend, and Ana–who’s snooping around the set is mistaken for an actress and given the role. Flattered, and excited, Ana takes the part without revealing that she’s the wealthy woman who owns the mansion. She’s a natural for the role, and soon she’s manipulating her way around the set–upsetting everyone–except the director. Meanwhile another complication sets in when fate sends the director inside Ana’s home, and here he begins a tentative friendship with the mysterious and disguised lady-of-the-house. He’s soon consulting her about the soap, and she steers him away from the “conventional morality” of the plot. Ana’s life becomes increasingly more complicated as the lines blur between her ‘real’ life and her double life as the actress Ana Anguish.

The film directed by Alvaro Velarde almost works–some of the scenes between the actresses are quite funny–especially when the claws appear, and it’s very easy to accept that this rich, bored woman would thrive on the nastiness of a soap opera set. But there’s something missing. The film doesn’t go far enough with its comedy, and the characters should be unleashed. There’s nothing ‘wrong’ with the film, and it’s certainly a pleasant little diversion. But given the premise, the film could have been so much more. In Spanish with English subtitles.

Tawdry, tacky, and packed with high soap melodrama, Written on the Wind is one of director Douglas Sirk’s greatest films. The story concerns the stinking rich and utterly rotten Texas Hadley oil family, and the rot is manifested in the two Hadley offspring, alcoholic playboy, Kyle (Robert Stack) and his insatiable, nubile blonde sister Marylee (Dorothy Malone). Their father Jasper (Robert Keith) is a decent hardworking–but frazzled man who can’t quite grasp how bad his children really are, and he still manages to nurse the hope that one day, they’ll reform.

Mitch Wayne (Rock Hudson) is Kyle’s boyhood friend. He works for Hadley Oil, and his relationship with the Hadleys is troubled. From childhood, Mitch has extricated Kyle from scrapes, and this is a habit that continues in adulthood. Similarly, Mitch often has to babysit Marylee–she has a habit of picking up the local males and running off to seedy motels for the afternoon. Mitch’s task is complicated by the fact that Marylee insists she’s in love with Mitch–a feeling that is not reciprocated.

Complications for Mitch and the Hadleys occur when Kyle romances and marries Lucy Moore (Lauren Bacall)–an elegant secretary employed by Hadley Oil. In spite of the fact that Mitch saw her first, Kyle–always the dominant male in their relationship since childhood–sweeps Lucy off her feet with a lavish, ostentatious courtship. Lucy marries Kyle, and Mitch meekly steps aside–even though he knows that Lucy’s marriage to Kyle isn’t going to be easy.

Written on the Wind is described as a film in “lurid” Technicolour, and while that’s an unusual way to describe it, the term fits and also matches the film’s content. There’s nothing subtle or implied here, and the bold plot cashes in on the twists and turns of completely overdone drama at every turn of events. Over time, Written on the Wind has developed a delicious camp factor, and some of the best scenes occur when Marylee throws herself at Mitch (literally), and he coyly and prudishly denies her the thing she wants the most. At one point, he even asks if she really thinks he would be ‘enough’ for her insatiable appetites. Dorothy Malone steals the film while burning fast and brightly as Marylee–the girl who just can’t help herself when she’s around men. Written on the Wind is splendid fun, and those who love “lurid” drama from the 50s should enjoy this film immensely. The Criterion DVD looks gorgeous–extras include: Douglas Sirk Trailers, and the Melodrama Archives.

“The party’s next door. And that’s the way it’s always been. Next door.” 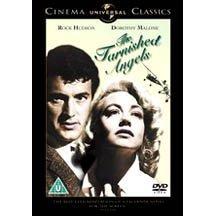 A film directed by Douglas Sirk, based on a book by William Faulkner, and starring the luscious Dorothy Malone … what more could you ask for? Tarnished Angels is a wonderful film, certain to please Sirk fans, and if you’re new to Sirk, then you’re in for a treat. The 1950s was such an interesting period for cinema, and Tarnished Angels has to be one of the decade’s memorable films. Set in the 1930s, it’s a tale of desperate people, edgy with bitterness and disillusion risking their lives to eek out a meager living.

New Orleans reporter Burke Devlin (Rock Hudson) meets a team of barnstormers at the local fair during Mardi Gras. Initially rescuing a child, Jack Schumann, from bullies, Devlin becomes fascinated with the Schumann team comprised of WWI flying ace turned stunt pilot Captain Roger Schumann (Robert Stack), his neglected wife, parachutist LaVerne (Dorothy Malone) and loyal mechanic, Jiggs (Jack Carson). Feeling sorry for the Schumann team, and with his curiosity aroused, Devlin offers them the use of his small apartment while they are in New Orleans. These are desperate times, and cash is hard to come by. The Schumanns lead a hand-to-mouth existence as they compete for prize money in their small plane, traveling across the country for various events.

Although it may appear that Devlin allows the Schumanns into his life, the reverse is true. Devlin witnesses the Schumann’s troubled marriage, and the obvious fact that Jiggs is in love with LaVerne. Roger Schumann is a cold, emotionally withdrawn man who manages to exact tremendous love and loyalty from both Jiggs and LaVerne, while they receive crumbs in return. When bitter LaVerne unburdens her troubles into Devlin’s sympathetic ears, sparks fly….

The plot, with its tragic dimensions, is strengthened by the drama of the daring and dangerous races performed by Roger Schumann. Burke Devlin plays an almost Jamesian observer role as he paws over the dregs of a cold, bitter marriage, but he also has a pivotal part in the unraveling of events as the characters tread a path to inevitable tragedy. Since this is a Sirk film (and considered his best by some fans), look for perfect shots with his subtly positioned characters.

Tagged as 50s film, based on book, pilot, soap opera