“You seem to use women too easily, my dear man. People get hurt in that game. Beware, one day one of them may avenge the others.” 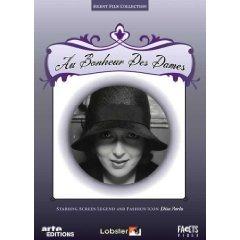 I’ve been reading quite a few Zola novels lately, and since I have a fascination with the book/film connection, it was only a matter of time before I started watching film versions of Zola’s 20 volume Rougon-Macquart series. Some months back, I watched Gervaise (1956) which is based on the 7th novel L’Assommoir, and then recently I found a copy of Au Bonheur des Dames (Ladies Paradise), a silent 1930 version of the 11th novel in the Zola series. This film is from director Julien Duvivier. He also made Pot-Bouille based on another novel in the series, but I haven’t found a copy of that with English subtitles yet.

While the novel is set in the hustle and bustle of France’s Third Empire, the film is set in the 1920s, and the film immediately captures the atmosphere of a world in flux–a world of horses, carriages and small businesses about to be replaced by cars and huge department stores.

The film begins, appropriately at a train station with the arrival in Paris of young Denise Baudu (Dita Parlo), an orphan from the country who’s arrived to join her uncle at his small shop. As she steps off the train and makes her way through the bustling streets of Paris, a plane flies overhead showering leaflets advertising the huge department store, Au Bonheur des Dames. Everywhere Denise turns there’s mention of this phenomenon and when Denise first sets eyes on the glittering lights and the gorgeous window displays, she’s mesmerised.

Unfortunately Denise’s uncle invited his niece in better times. The mammoth store Bonheur de Dames, which is directly across from her uncle’s business, has effectively ruined him.  His grimy, dingy little shop simply cannot compare to the glittering competition. He’s no longer in a position to employ anyone, and so Denise drifts across the street to the beckoning lights of the Bonheur des Dames and there she’s employed first as a floor model.

Soon she attracts the attention of several men: a homely young clerk, the lascivious manager and the owner, Octave Mouret (Pierre de Guingand)….

The film lacks the complexities of the book. Background information on Octave Mouret is absent, and unfortunately the film simplifies the intensity of Octave Mouret’s business acuity. In the novel, he’s a brilliant businessman, and this is detailed in several instances. In the film, however, this is distilled down to the essentials and the physical evidence of the Bonheur des Dames. For example, in the book, Octave sets in motion a fierce sense of competition between the shop clerks by giving commissions. In the film however, employee interactions are mostly limited to a brawl in the cafeteria, and a bitchiness between the floor models. Neither does the film address the dilemma of Denise’s divided loyalties, and only hints at the book’s depiction of Denise as a woman with an intuitive business sense that matches Octave’s ambition.

Although the film simplifies the book, it is not a disappointment.  The film’s strength lies in its depiction of the huge department store. Interior scenes depict a lavish, garish Tower of Babel with distant aerial shots of the customers resembling ants on a giant anthill as they ascend and descend the enormous, central sweeping staircase. Close-in shots concentrate on the madness and mayhem of the shoppers in riot-like scenes.

As Mouret plans the expansion of the Bonheur des Dames, neighbourhood shops fall victim to the insatiable appetite of progress, and phantasmagorical scenes depicting the destruction of the old shops are juxtaposed with the expansion of Mouret’s   “Temple of Temptation” to consumerism. Another scene depicts Octave’s love interest, madame Desforges (Germaine Rouer) sitting in an alcove against the backdrop of a gorgeous art deco mural.

Beautiful shots of reflections in mirrors and in glass windows are scattered thoroughout the film.  Visually this is a gorgeous film and Dita Parlo’s wonderfully expressive face is complemented with plenty of close-ups.

Tagged as 30s film, based on book, silent film, zola

“You haven’t seen the last of me, Bitch.” 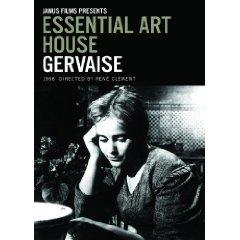 Gervaise, a 1956 film set in 19th century Paris is based on the Zola masterpiece L’Assommoir. The film’s main character is Gervaise Macquart (Maria Schell), a beautiful, blonde laundress whose wholesome youth and beauty is marred by a slight limp. When the film begins, Gervaise lives in a dingy room with her lover Lantier (Armand Mestral) and their two young sons. Even though they are not married, Gervaise calls herself Lantier’s wife unaware of the ridicule that this brings her behind her back.

Lantier, it seems, is in the throes of an affair with a neighbour. Everyone in the Parisian slum knows about it, and the news forms a sort of gossipy thrill which explodes into titillating entertainment one day when Gerviase fights with the other woman’s sister, Virginie (Suzy Delair). This incident has long-term ramifications for Gervaise. Eventually Gervaise moves on from her grief at losing Lantier and she meets and marries affable roofer Coupeau (Francois Perier).

At first Gervaise thrives in her marriage to Coupeau. They have a child together, Nana (Françoise Hery) and Gervaise has a goal of managing her own laundry. This dream is put on hold temporarily when Coupeau has an accident that takes away his ability to earn a living, but long-term, devoted friend Goujet (Jacques Harden) lends Gervaise the money, and she goes into business for herself. Gervaise’s troubles begin, although it takes her a long time to realize it, when Coupeau has his accident. Then the arrival of Virginie and the parasitic Lantier seals Gervaise’s fate.

The film, while good entertainment, unfortunately, falls short of Zola’s marvelous novel, L’Assommoir. In all fairness, I don’t think a film format (just under two hours) is the right setting for the novel. This needs to be a miniseries. Before watching the film, I was curious to see just how a film in the 50s would cope with some of the more salacious details of the novel–Gervaise’s peculiar domestic arrangement with Lantier and Coupeau, for example. The film chooses to gloss over much of this savage degradation and only lightly touches on the subject. Interestingly the film glosses over most of the book’s savagery: the viciousness of Gervaise’s former friends and neighbours, Gervaise’s slide into alcoholism (it’s touched on in the film) and her eventual wish for the oblivion of death. The film simplifies while avoiding the highly detailed feeding frenzy that takes place over Gervaise’s body and her ability to work–whereas the novel is wrenching in parts as it describes Gervaise’s gradual slide into degradation and oblivion.

The film from director Rene Clement tries to maintain a sense of faithfulness to the novel–it includes the wedding scene, for example, and Gervaise’s grand dinner for her ungrateful neighbours. But when it comes to showing the details of the viciousness of life among the working class, the film falls short. Perhaps it was considered too depressing to create a film that went into some much detail of the moral depravity and cruelty of its subjects–although the film does show in a couple of scenes how naughty Nana became while still just a wee tot. The film rather interestingly also accentuates the way that Lantier and Coupeau are somewhat similar types, but by glossing over the more sordid, savage aspects of the novel, the story loses its grandeur and becomes more of an average love story. What we need is a BBC miniseries or a French television miniseries to do Zola’s masterpiece justice.

Tagged as 19th century, based on book, French film, zola

Zola is one of my all-time favourite authors, so when I saw this British television production of Therese Raquin from 1980, I had high expectations. The 60s-70s saw some of the very best BBC adaptations of classic novels–Hardy’s Jude the Obscure, Zola’s Nana, Casanova (from his memoirs), and now I’ll add Therese Raquin to the extended list. This is a superb adaptation, and if you are into Zola, period drama, or British television, do yourself a favour, grab this 2-disc set, and prepare yourself for some fabulous viewing. 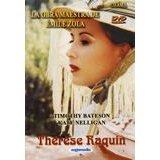 When the film begins, Therese Raquin (Kate Nelligan) is a young married woman, wed to her dull, child-like cousin, Camille (Kenneth Cranham). They live with his mother, the very solid, very reliable and steady Madame Raquin (Mona Washbourne)–a woman who tends to coddle her only child Camille so much that it’s impossible to tell if he’s really sickly or if he’s just been indoctrinated to think he’s a semi-invalid. Madame Raquin runs a small shop, with Therese helping, and Camille works elsewhere as a clerk. The three live above the shop, in modest but stable circumstances.

Life for the Raquins has an established routine, and it’s a routine that Madame Raquin and Camille enjoy. Each Thursday evening, is ‘domino night’ and old friends Olivier Michaud (Philip Bowen), his wife Suzanne (Jenny Galloway), Michaud’s father (Richard Pearson), and Grivet (Timothy Bateson) gather to play dominos for a few sous while they enjoy each other’s company. The predictability of these evenings plays out with the same script every week, and everyone except Therese enjoys the time spent with these old friends. She’s so bored, she’s stupefied.

And then one-time artist, now petty clerk Laurent Leclaire (Brian Cox) enters the picture. There are hints dropped that Laurent is a weak, dissolute character as he failed to finish his legal studies and instead pursued a career as an artist with the necessary accoutrement of naked models. But with little talent, he now works as a minor clerk. Laurent immediately recognizes and is fascinated by Therese’s latent sexuality, and to Therese, the debonair Laurent seems different and exciting. Therese’s sexual awakening stirs dark passions, and Laurent, who initially visits the Raquins for free meals, becomes obsessed with his best friend’s wife. Drawn to each other, they indulge in an addictive, passionate, and explosive adulterous affair but find their moments of passion severely crimped by Therese’s oppressive home life and Laurent’s penury. Soon they hatch a plot to murder Camille.

Therese cannily understands that the small social group that convenes every Thursday is interested in continuing the predictable social pattern above all else, and she schemes to turn this to her advantage. Unfortunately the tedium of Therese’s suffocating life is not alleviated by the exchange of men. The Thursday evenings, which take place with boring regularity, but are supposed to represent the highlight of the Raquins’ social life, are so intricately rendered that even boring takes on a fascinating aspect. It takes a great deal of skill to replicate boring and make it interesting but this is achieved in this splendid production. Similarly, the abject poverty of Laurent’s life is underscored in just a couple of scenes. While the Raquins have a very small modest, lifestyle, they seem positively rolling in money when we see the reality of Laurent’s horrible life in a frozen, filthy garret.

Each stage of this fascinating, painful and sometimes horribly cruel story is executed upon the stage with precision and perfection. There’s Therese and Laurent’s passionate explosive affair–a phase in which these two characters fuel each other’s impatience and sexual appetite, dragging everyone else into the inferno. And then there’s the aftermath, the recriminations, the guilt, the self-loathing and the latent cruelty that spills out onto poor Madame Raquin. And in the meantime the domino evenings become a hypocritical travesty, a painful pantomime.

This is an exquisite riveting production with top-notch acting blended with Zola’s understanding of human nature. From the highs and lows of passion to the abject cruelty and inhumanity that plays out in the Raquins’ household, this is a feast for Zola fans. Keep your eyes open for Alan Rickman in a fairly small role.

Now if someone would just release the 1968 BBC version of Nana on DVD….

Tagged as based on book, British television, infidelity, zola