In the Spanish film Second Skin Elena (Ariadna Gil) is happily married to Alberto (Jordi Molla). Well, at least she thinks she’s happily married until she begins to sense that something is wrong in the relationship. Elena tries discussing the problem, but Alberto consistently denies that anything is wrong. Elena discovers hotel receipts in her husband’s pocket, and she confronts hims about an affair and ‘the other woman.’Alberto admits having an affair, but his new relationship is with another man, and he hides this from Elena.

The acting in this fine Spanish soap opera is good. However, the character of Alberto is a bit problematic. The main dilemma in the film is not the affair, or the crumbling marriage, but whether or not Alberto can accept his homosexuality. He is torn between his wife, (he still claims to love her), and his new passion, Diego (Javier Bardem). While Alberto struggles to accept his homosexuality, his torment also can unfortunately be interpreted as insincerity as he weasely darts back and forth between his wife (who’s trying hard to understand), and Diego, who is confident and strong under adversity. The rock-solid characters of Elena and Javier serve as a contrast to Alberto’s uncertainty, despair, and fear, but the very nature of the love triangle places Alberto on shaky ground, and this was detrimental to the film’s central idea. Consequently, Alberto appears to be a less-sympathetic character, and more of a weasel than was perhaps intended. Javier Bardem is the Spanish version of George Clooney, and it’s always a pleasure to see him in a role. Also special note here for Cecilia Roth as Diego’s smitten work-mate. Directed by Gerardo Vera.

“Anyone who survives has to change.” 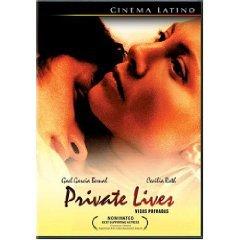 42-year-old Carmen (Cecilia Roth) leaves Madrid and returns home to her native Argentina to visit her dying father. She’s lived in Spain for the past twenty years with infrequent, brief trips home.

Carmen has arranged to rent an apartment during her two-week stay, and she’s also arranged for the services of a young male model Gustavo (Gael Garcia Bernal) and a female companion. While Gustavo wants to get to know Carmen better, she holds him and everyone else at a distance. Carmen clearly has emotional problems, but her family is very adept at hiding secrets. Younger sister Ana (Dolores Fonzi) is determined to extract Carmen’s secrets from her brother-in-law Dr Rossemberg (Luis Ziembrowsky).

Part kinkfest, Private Lives fails to adequately explore many issues dragged front and centre by the script. Several scenes cover Carmen’s erotic fetishes, but there’s little substance–beyond the moaning and the grinding–to explain Carmen’s past. Instead the emphasis is on kink–at least for the scenes in Carmen’s apartment. The film shifts focus between Carmen’s fetishes and Ana’s determination to discover the truth about Carmen’s past. The result is a film that addresses Carmen’s kinkiness, but fails to delve into Carmen’s political past. There’s so much here politically that could be explored, but it isn’t. The sense remains, however, that both Gustavo and Ana are amazingly ignorant about life in Argentina before they were born. Ultimately, the most interesting aspect of the film is Carmen’s need to recreate a cell-like structure for gratification. Private Lives is a tepid drama made a little steamier with Cecilia Roth’s charged sexuality. In Spanish with English subtitles. From director Fito Paez.

“Someone who betrays his ideals, particularly in bed, is very dangerous.”

Passion, and adultery flourish on opposing sides of the ideological fence in the Spanish drama Beyond Desire (AKA Deseo). It’s 1945, and Elvira (Leonor Watling) lives with her zombie-like mother (Rosa Maria Sarda) and politically active sister Raquel (Maria Vazquez) in a grotty little set of rooms in Madrid. Elvira’s father–a prominent communist doctor–was shot for his political activities, and Elvira’s husband Julio, a ‘Bolshevik’ (Ernesto Alterio) is rotting away in prison. But things start looking up when Elvira gets a job as a housekeeper for a man named Pablo (Leonardo Sbaraglia). Pablo–with a mixed German-Argentinean background has some vague connection with the German embassy. He has the sort of life that Elvira’s family used to have–a gorgeous apartment with walls of books.

Elvira and Pablo fall into a mad, passionate, sex-drenched affair with remarkable speed, and Alina (Cecilia Roth)–Pablo’s sarcastic and decadent acquaintance–watches Pablo with disturbed amusement. Pablo and Alina are in Spain to act as a liaison with Hitler’s government. Alina sees Elvira as a threat to their mission. Some scenes hint at the idea that Pablo and Alina’s relationship is less-than-platonic, and that perhaps Pablo enjoys baiting Alina with his affair with Elvira, but this idea is never explored. Instead the film focuses on the torrid affair.

This is a well-made, glossy production–lots of passion–and if it falls down on the plot, you may not notice because the affair is rather distracting. The two elements that provide dramatic tension are the true nature of Pablo’s shady activities and the reaction of Elvira’s soon-to-be-released husband. It’s a little difficult to swallow the notion that Elvira has no idea that Pablo, a privileged fascist–is involved in nefarious affairs of the state. After all, she’s not a politically naive person. But the film chooses to project Elvira as a woman who doesn’t realize Pablo’s German connections until it’s too late. Similarly, Elvira’s cuckolded husband serves as just a device to fluff out the rather average plot. The film is still good entertainment, but Cecilia Roth steals the film as the nasty Alina. Directed by Gerardo Vera, Beyond Desire is in Spanish with English subtitles.

“Silence is a friend who’ll never betray you.”

Lucia, Lucia is a film that proves that exciting things are happening in Mexican cinema. Lucia (Cecilia Roth) is the heroine of this tangled tale, and the story begins when her husband Ramon (Jose Elias Moreno) suddenly disappears. Lucia begins receiving cryptic communications from a Maoist terrorist group called “Workers’ Pride” who demand 20 million pesos as ransom for Ramon’s return. Lucia doesn’t have that sort of money, but then the terrorists reveal that Ramon has a secret bank account that contains slightly more than that amount.

Lucia’s elderly neighbour, Felix (Carlos Alvarez-Novoa) comes to her aid. He’s a geriatric revolutionary who still has a few tricks up his sleeve. Lucia also becomes romantically entangled with a young neighbour, Adrian (Kuno Becker). The three join forces, and in their efforts to free Ramon, they come across explosive gun dealers, and bored government bureaucrats.

Part thriller, part comedy, the plot twists and turns include revelations from Lucia that she’s an unreliable narrator. She undergoes physical transformations several times as the plot develops, and she admits that part of her story is not true–she’s a frustrated would-be novelist with a tendency to be ‘creative’ with the facts. She confesses, “I’ve had other lives”, but it seems those lives have been imaginary more than anything else.

While the story spins on itself to little avail towards the end of the film, Lucia, Lucia from director Antonio Serrano has a fresh energetic approach is well worth catching if you’re a fan of Mexican cinema or a fan of the delectable Cecilia Roth–always a fascinating actress to watch. In Spanish with English subtitles.

“When you find your own place, you can’t desert it.”

A Place in the World–an Argentinean film–is a frame story. It begins with the adult Ernesto (Mariano Ortega) traveling back into the Argentinean countryside to his family’s former home, and then the story seeps back into Ernesto’s childhood. 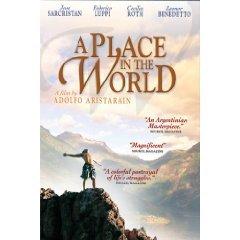 The remainder of the story focuses on 12-year-old Ernesto’s (Gaston Batyi) life. He lives with his idealistic parents–his father, ex-professor Mario (Frederico Luppi) teaches the local children and his mother Ana (Cecilia Roth) is a doctor who is dependent on medical supplies sent by friends. Mario and Ana are clearly committed to helping others. Together they’ve formed a cooperative with the local shepherds, and they fight to maintain a united front against the wealthy landowners.

Hans (Jose Sacristan) a Spanish geologist arrives. He’s employed by one of the wealthiest landowners who believes there’s oil on his land. Hans–a lapsed anarchist–no longer feels strongly about anything. He left his belief system behind somewhere in his youth. Ernesto admires Hans, and the geologist soon becomes a frequent visitor to Mario and Ana’s home.

Many professional reviews tout A Place in the World as the best Argentinean film ever. It’s flagrant sentimentality and cliched script unfortunately renders it into mediocrity. 12-year-old Ernesto teaches the daughter of the richest, nastiest landowner how to read, for example. Sweet, touching … but also strikingly simplistic, unoriginal and maudlin. Instead of possessing unique, interesting characteristics, Hans, Mario, and Ana are two-dimensional and represent ‘types’ : Ana–the dedicated, self-sacrificing doctor, Hans–the stranger who learns to believe in something again, and Mario, the noble suffering teacher. Ultimately–given the rave reviews this film received–it was disappointing and dull. It’s passable, but nothing extraordinary–more like some sort of Hallmark Film of the Week. Directed by Adolfo Aristarin, A Place in the World is in Spanish with English subtitles.

“You are as immoral as I am, but you don’t practice it.”

Martin (Hache) is a splendid character-driven drama from Argentinean director Adolfo Aristarain. The film focuses on the relationships between four diverse characters–Hache also known as ‘Jay’ (Juan Diego Botto), his emotionally remote, wealthy father Martin (Federico Luppi), actor Dante (Eusebio Poncela), and Martin’s girlfriend Alicia (Cecilia Roth). The film begins in Argentina with an upset Jay spending an evening in a club and carelessly taking a drug overdose. Martin flies to Argentina to see his son, and Jay’s mother, who is remarried and is expecting another child orders Martin to take Jay back to Spain. Martin agrees reluctantly. He’s busy working on a new screenplay, and he doesn’t try to hide his lack of interest in his son.

Martin seems to have little in common with his two main people in his life. There’s the bubbly, extrovert Alicia, who’s so outspoken, Martin seems embarrassed to be seen in her company. And actor Dante, is a self-professed Epicurean, and that basically seems to mean that he leads a no holds barred life of considerable excess. In contrast, Martin is quiet, withdrawn, cold and serious. He makes a study out of avoiding commitment, and when the confrontational Alicia drives a point of truth home to Martin, he simply backs her off with demeaning comments. Both Alicia and Dante don’t seem to expect much from their relationship with Martin, and that’s just as well because he’s cold and unapproachable.

Dante and Alicia befriend Jay, and even though they are both terminally irresponsible people, they are appalled by how Martin handles his son. Dante loves the anonymity of living in a hotel, but he makes room in his life for Jay, and Alicia, who has a drug habit that increases in proportion to her unhappiness, is ready to form some sort of unit together with Martin and Jay. While both Dante and Alicia chide Martin for his lack of emotional involvement towards his son, Martin remains stubbornly resistant to help and suggestions.

It’s the phenomenal acting from Roth and Poncela that make this film so memorable, and some of the best scenes occur in the discussions that take place between the four characters. The conversations reveal a great deal about the dynamics of the relationships (think Eric Rohmer–but not as cerebral), and the film’s focus is on acceptance of individuality–especially the acceptance necessary for a parent-child relationship. In Spanish with English subtitles.