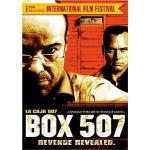 In the Spanish crime film Box 507 (La Caja 507) Maria (Dafne Fernandez), the only child of bank manager Modesto Pardo (Antonio Resines) and his wife  Angela (Miriam Montilla) was just 16 years old when she died in a horrible fire. It’s now seven years later, and Pardo and his wife are clearly damaged by their loss. Bad luck strikes once again when Pardo’s bank is robbed by a band of criminals who hold Pardo’s wife hostage in order to ensure his cooperation. The bank robbers empty out the vault, and when Pardo–who’s been drugged and duct-taped–wakes up, he finds himself in the box surrounded by the scattered contents of looted bank safe deposit boxes.

As Pardo waits to be rescued, he happens to catch sight of a discarded stack of papers which hold details indicating that his daughter’s death may not have been an accident after all.

The police step into the bank robbery, and while a certain amount of suspicion falls onto Pardo, he’s mainly considered an innocent pawn. Curiously, Pardo doesn’t hand over the papers–the contents of Box 507 to the police, and at this point, the film segues into the investigation of yet another crime–what exactly happened to Maria Pardo.

Meanwhile the owner of the box’s contents, Rafael (Jose Coronado) and his live-in punching bag, vodka-soaked ex-bar dancer Monica (Goya Toledo) come to the wrong conclusion that the bank robbers have stolen the papers they hid at the bank for safe-keeping. Rafael is a nasty piece of work, but then everything is relative, and even Rafael trembles in his psychotic mafiosa’s boss’s presence.

The film very competently juggles two parallel plot threads–there’s Pardo, the man who was initially a patsy who is emboldened by bleak circumstance and revenge to hunt down his daughter’s killers, and Rafael, who erroneously goes after the bank robbers for his missing papers. Inevitably (but not predictably) the two men–Pardo and Rafael are on an explosive collision course.

The plot capitalizes on the various levels of power wielded by the characters to introduce the idea of various levels of evil. While some characters obviously are sadistic and enjoy enacting revenge in hideous ways (creative kills but no close-ups), other characters are content with making business deals with the understanding that everyone has a price. The film (happily) has no high-tech gymnastics, and instead this is a revenge tale of an ordinary man who sets out to get even with the people who ruined his life.

From director Enrique Urbizu, Box 507 was filmed in the Costa Del Sol.

Tagged as based on book, Crime, revenge